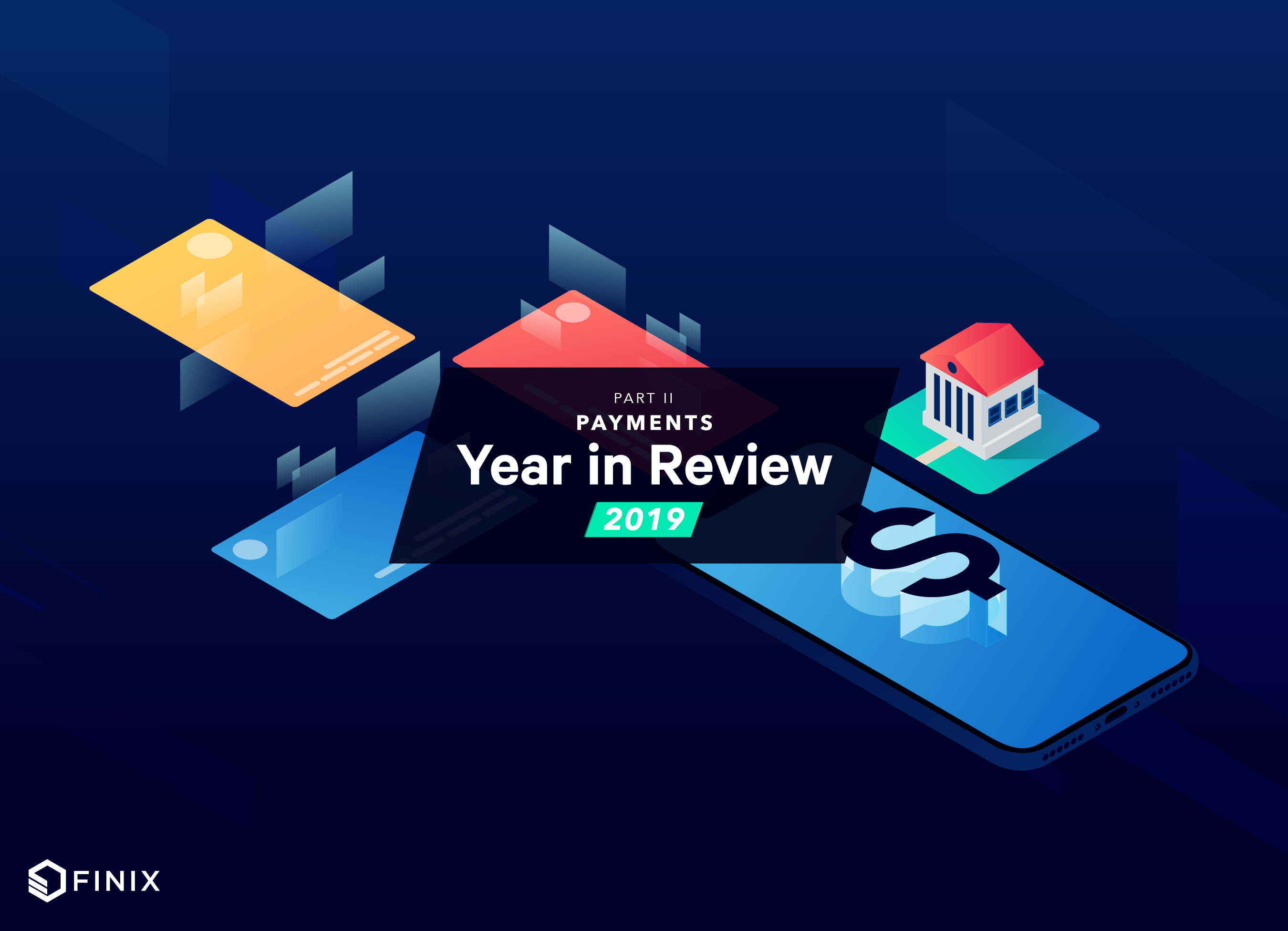 Part 1 of our yearly payments review covered mega-mergers by payments powerhouses like Fiserv and FIS. We also looked at why every tech company wants to be a bank. In part 2, we’ll cover faster payments in the US and the payments arms race taking place around the globe. Here we go…!

Faster Payments in the US: ACH vs. RTP vs. P2C

Faster payments are coming to the US one way or another, and 2019 was a seminal year in determining exactly how that will happen. Here's a quick overview of the key players involved in moving money in the US:

Disclaimer: Visa invested in Finix's Series A earlier this year and Finix is a service provider to Visa's push-to-card service, Visa Direct.

In July 2017, the Fed assembled a Faster Payments Task Force. Their overarching goal? Build a “faster, ubiquitous, broadly inclusive, safe, highly secure, and efficient” payment system in the United States by 2020. In response, The Clearing House launched the Real-Time Payments network (RTP) in November 2017 and has spent the past two years enrolling member banks. This year, Wells Fargo, HSBC, and JP Morgan Chase all announced RTP-powered treasury products for their clients (Chase, via integration with Kyriba). Jack Henry, a provider of core banking technology, also launched a faster payments hub this year, giving customers access to RTP and had 15 financial institutions signed up as of October.

Meanwhile, Visa Direct and Mastercard Send have been gaining wider adoption among gig economy/on-demand companies and fintechs. This year alone, Quickbooks, Instacart, and Venmo all announced P2C-powered “instant cashout” features. Banks are also jumping on board. In February, MetaBank announced a partnership with Mastercard to provide P2C as part of their treasury suite, making P2C somewhat competitive to ACH and RTP. Visa’s CEO even took the time to diminish the need for faster ACH payments at an investor conference in NYC: “I’m not convinced” that faster payments “are going to take off like crazy. Does the consumer really need the funds that much faster?”

In NACHA’s defense, they have been trying to speed up ACH for a while. They launched Same-Day ACH in 2016 and put together the Faster Payments Task Force in 2017. Throughout 2019, they continued to propose or roll out ACH Network enhancements like later processing windows, earlier clearing times, and increasing the same-day ACH dollar limit to $100K. Things in ACH-land looked good but not real-time. Same-Day ACH volume grew by 54% in Q3 2019 versus the same quarter a year ago, and fintechs like OnDeck, Routable, and WePay have all built features around Same-Day ACH this year. In July, perhaps sensing the other networks were gaining traction on ACH and not wanting the bedrock of electronic payments in the US in the hands of corporations, a group of House and Senate Democrats introduced a bill that would require the Fed to create a real-time payments system.

In August 2019, that’s precisely what happened...well kinda. The Fed announced their own real-time payment network, called FedNow, but said it wouldn't be launched until...checks notes...2023 or 2024. In response, The Clearing House made it clear they want to be the only real-time payments game in town and that this development would disincentivize them from continuing to roll out RTP. So things are slightly messy now, and it’s not at all clear on which network we'll all be sending money in real-time, but some retailers welcome the competition two networks bring. Regardless, this is definitely a space to watch as it seems faster payments in the US are inevitable.

One way of moving money faster is through cash advance apps like Earnin. These apps send users money they’ve already earned instantly for a small fee. It’s unclear if this activity can be considered a loan or simply a cash advance in exchange for a service fee. If considered a loan, the small amounts of money advanced relative to the fee can lead to effective APYs as high as 400%. That presents a severe discrepancy with our usury laws, which cap many interest rates at 36%. Congress is concerned and has proposed the Veterans and Consumers Fair Credit Act aimed at capping payday loan interest rates. This whole industry is essentially a workaround for the 2-3 business day ACH waiting period. Speeding up payments might make these products and the associated regulation unnecessary.

Payments Across the Globe

This review has been very US-centric so far, so let's take a look at some of the deals and payment initiatives happening around the globe. The numbers involved here are jaw-dropping.

In March, Japanese SoftBank (of WeWork fame) announced a $5 billion fund focused exclusively on Latin American tech companies. A month later, they put that money to work with a $1B investment in Rappi, a Colombian delivery (and increasingly financial) service company. SoftBank also invested $1B into Wirecard, a German white-labeled payment and card issuing company, and participated in Paytm’s latest round, which valued the Indian company at $16B.

PayPal’s $4B acquisition of Honey in November made a lot of noise but, most of their 2019 M&A, investment, and partnership activity were actually aimed at expanding their international portfolio:

Juniper Research estimates that international digital remittances will reach $525 Billion by 2024, so it makes sense that a lot of investment and product development is happening in this space. Here are some of the most interesting remittance-related headlines of 2019:

Behind the scenes, there’s been a cross-border battle playing out between Visa and Mastercard. As recently as January 2019, it looked as if Mastercard was going to acquire London-based Earthport, which provides cross-border payment services to banks and money transfer service providers. Then Visa increased their offer to $320M, and by March, Mastercard decided to opt-out of the bidding war and bought NYC-based cross-border payments firm Transfast instead. Both companies are eager to add cross-border functionality to their real-time services, Mastercard Send and Visa Direct, which are handy for use cases like funds disbursements, peer-to-peer payments, marketplace payouts, and bill payments.

In August, Mastercard upped the ante, further spending $3.19B on Denmark-based Nets’ account-to-account business to bolster real-time and bill payments. But Mastercard also saw a cross border play in this acquisition. Paul Stoddart, president of New Payment Platforms at Mastercard: “We obviously expect that the collective set of technology and the services that we’re buying can be further exported more widely across Europe and into other markets.” Visa, for its part, announced two partnerships with Western Union and MoneyGram focused on offering Visa Direct as part of each company's international disbursement networks.

Some of the most exciting fintech activity is happening across Latin America and Africa. It’s fascinating to see how these ecosystems are developing as each region has its own unique dynamic based on the specifics of existing infrastructure, public-private partnership, and which foreign investors are active. Here's what's happening in Mexico and Nigeria specifically:

That’s it for Finix’s inaugural Payments Year in Review. If you missed part 1, we suggest you go back and read it now. We can’t want to see what happens in 2020! See ya’ on the other side!