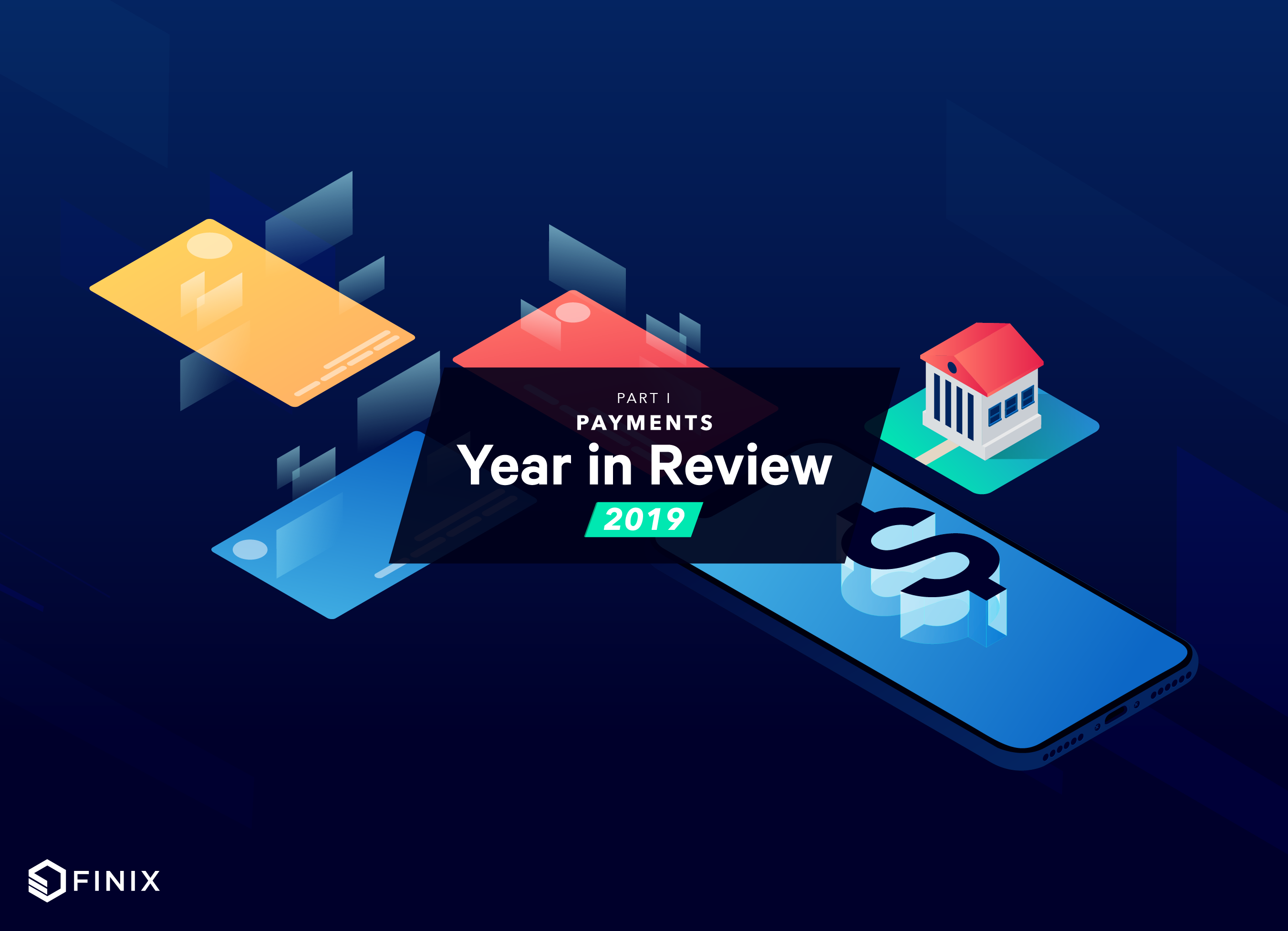 It’s been a BIG year for payments, which is exciting for payments nerds like us! Even if you haven’t reached the pinnacle of payments obsession, the sheer numbers these payments companies put up in 2019 should make you take note. It’s almost too much to keep up with, so we took some time to catalog the biggest payments-related stories of 2019. We also did our best to highlight some essential stories we felt were overlooked. Be sure to checkout Part 2 of our 2019 Payments Year in Review where we look at faster payments in the US and the payments arms race taking place around the globe.

Kicking off the year with a bang was FIS with their acquisition of Worldpay–who just merged with Vantiv the year before–to the tune of $35B. By mid-summer, Fiserv’s $22B First Data merger was also complete. Not to be outdone, Global Payments then bought TSYS for $21.5B. But the drama didn’t stop.

Bank of America also gave notice to First Data, now Fiserv, that they would be ending their long-standing payments processing joint venture in June 2020. With Bank of America Merchant Services shutting down, BofA has free reign to pursue acquisition, partnership, or in-house development of their payments processing technology, which could make for interesting M&A activities in 2020. Elavon, another top-10 merchant acquirer, had two notable acquisitions this year, picking up CenPOS to move deeper into integrated payments and SagePay ($300M) to expand their European footprint.

Chase seemed relatively content with their current merchant services division, Chase Paymentech, yet still dropped $500M to buy InstaMed, a healthcare payments company. Chase also announced they're developing an e-wallet solution for tech companies such as Airbnb, Lyft, and Amazon in an attempt to use both their consumer banking and merchant services capabilities to create more value and revenue.

Payments are lucrative–global payments revenue totaled $1.9 trillion in 2018, according to McKinsey–which invites competition. Accenture estimates $280B in global payments revenue (~15%) could flow away from banks to non-banks entities, technology-infused payment companies, and other digital payment methods by 2025. As a result, incumbents are doing what they can to consolidate volume; integrate their issuing, core banking, and acquiring solutions; or find ways to distribute payments via software to stay competitive.

What you may have missed:

Every Tech Company Wants To Be a Bank

Except for banks...they want to be tech companies.

We finally did it! Every company in existence now offer their own debit or credit card:

It’s almost as if companies with existing, large customer bases can make incremental revenue by launching new financial services to those same customers.

But upstarts are making moves too. Scores of neobanks are raising TONS of capital to offer debit cards, depository accounts, and more to an ever-growing pool of customers. Chime, for example, announced they have 5M customers and raised $200M this year. N26, the millennial-focused, mobile-first challenger bank raised $170M at a $3.5B valuation, and UK-based Monzo raised $144m at a $2.5B valuation. It's honestly impossible to keep track of all the bank-like entities popping up these days, but based on these numbers, it seems safe to say challenger banks are here to stay.

Sadly, Facebook didn’t launch a debit card this year. But they did jump headfirst into payments with the launch of Libra, their very own cryptocurrency, which promptly received scrutiny from the US government and began losing founding members like Stripe, eBay, Mastercard, and Visa. For their next act, newly rebranded FACEBOOK announced Facebook Payments, which allows FB users to send money to each other on their core app, WhatsApp, and Instagram. While this will help reduce some of the checkout friction on apps like Instagram, the potential of encouraging more informal commerce on Whatsapp and FB Marketplace is an even bigger opportunity. WhatsApp, for example, has been piloting payments in India for a while and announced plans this year to expand to Mexico, Brazil, and the UK. WhatsApp Business accounts also got access to product catalogs, and customer labels functionality this year, helping small merchants around the world sell more stuff.

A lot of this card issuing activity is made possible by the quiet rise of companies like Marqeta and Galileo over the past few years. While most people have no idea what these companies do (they provide modern card issuing and issuer processing platforms) they are absolutely vital to the boom in consumer fintech companies we're seeing*. This trend has actually been building for a while. Marqeta was founded in 2010 and Galileo has been in operation for 19 years. But don't worry. Marqeta and Galileo's good work isn't going unnoticed. They raised $260M and $77M, respectively this year just in time to fight off newer entrants like European payments powerhouse Adyen, which launched Adyen Issuing over the summer, and new card issuing platform, Deserve, which raised $50M from Goldman Sachs and others. So, for as much as it seems like we've reached peak debit card, there's no reason to think this trend will stop any time soon.

If you enjoyed this post, be sure to checkout Part 2 of our 2019 Payments Year in Review where we look at faster payments in the US and the payments arms race taking place around the globe.