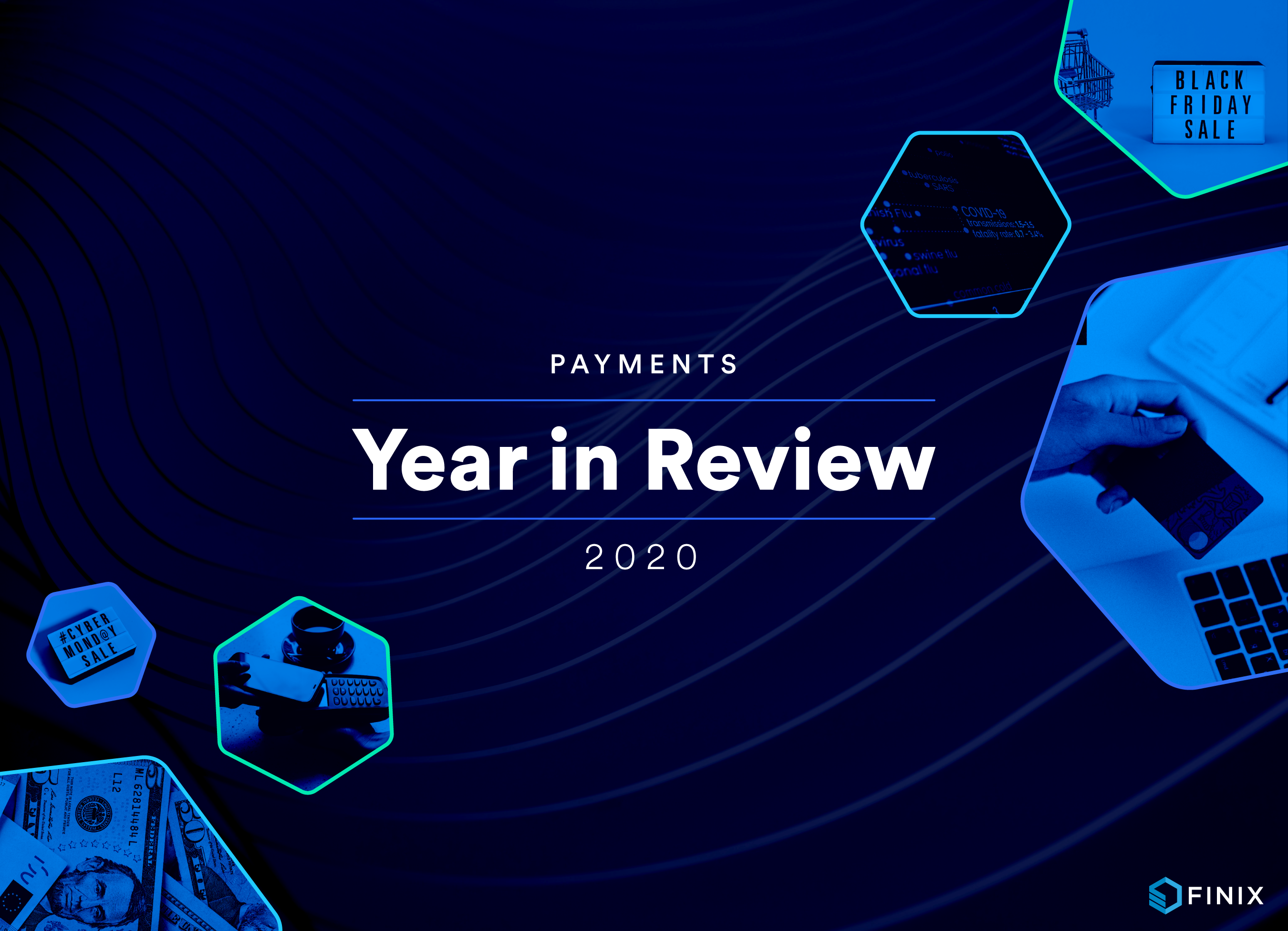 It’s that time of year again. You already know the Finix team are some of the most passionate people in payments. Despite COVID rightfully dominating the news cycle this year, fintech saw little slowdown. 2020 has given us rapid product innovation, jaw-dropping funding, mergers, and acquisitions, as well as novel federal intervention. There were lots of winners, a few losers, and everything in between. Follow along to revisit some of the most wow-worthy things that happened in payments this year.

Digital payments, which were already seeing significant growth before the pandemic, got a big boost when the world adjusted to lockdowns and social distancing restrictions. Contactless payments went from a nice-to-have capability to a must-have, essential service for businesses. 50% of consumers worldwide are now using digital payments—including tap-to-go credit cards and mobile wallets—more than they did before the pandemic. In the U.S. alone, contactless payments usage has risen 150% since March 2019.

User demand has led to outstanding performances for companies offering cashless methods, such as Apple, Square, and PayPal. Growth has been so strong, even search and social media companies like Google and Facebook are moving into the payments market. With tech partners, major retailers across industries have rapidly introduced new payment options to keep consumers feeling safe. CVS became the first national store to integrate PayPal or Venmo QR codes at checkout. ExxonMobil also added QR codes and NFC tags to its fuel pumps. Kroger, which launched its own mobile payment program last year, is piloting multiple mobile payment programs at 61 stores under its QFC banner. Not to be outdone, Amazon launched a biometric technology called Amazon One that allows shoppers to pay at stores by placing their palm over a scanning device when they walk in the door or when they check out. We’re not sure how we feel about that one.

The Year of Payments Infrastructure

To keep up with digital demand and new customer expectations, companies have to become payments companies in some form or fashion. Businesses are taking a long hard look at their underlying infrastructure, and they’re turning to technology that didn’t exist a few years ago. In an industry traditionally served by banks, new and innovative non-bank payment providers are entering the market and rapidly gaining ground.

Behind the scenes, modern commercial infrastructure companies like Adyen (valued at $57B), Stripe (rumored to be worth a now eye-popping $70B), AliPay (valued at $200B), and Amazon Payments are building the platforms that will power the future of global e-commerce. Klarna and Affirm, which offer buy now pay later services, and Marqeta, which enables companies to issue credit and debit cards to their staff, are all estimated to be worth over $10B. This summer, online payments company Checkout.com claimed a $5.5B billion valuation, and its competitor, Fast, is just a year old and already reported to be valued at $1B.

As valuations soar, so have acquisitions. The three largest card networks all initiated purchases reportedly worth nine figures or more. In January (can you remember that far back?), Visa announced it was buying Plaid, a network that makes it easy for people to securely connect their financial accounts to financial apps. Mastercard responded by snapping up Finicity, a provider of real-time access to financial data. Both agreements were meant to strengthen the purchasers’ open banking platforms and offer more financial services choices to customers. The Department of Justice (DOJ) had something to say about these deals (more on that later), showcasing the vast impact of fintech on our lives. It’s hard to find a group where fintech has been more critical this year than for small business owners. That’s why, in what’s being called the “deal of the year,” American Express acquired Kabbage, a small-business focused fintech, to help expand its SMB lending business.

It’s not just credit card companies; big banks, larger fintechs, and even unexpected tech companies vied for better positions in the payments market through acquisitions. Paypal finalized its purchase of coupon finder, Honey. Personal finance start-up SoFi paid $1.2B for Galileo, a payments company that makes card issuing and program management available through APIs. Intuit just paid $8.1B for Credit Karma which sold its tax-prep product to Square last month for $50M to avoid antitrust concerns ahead of its combination with Intuit, which makes TurboTax. Square also acquired Verse, a Spanish P2P payments app, in June to combine into its Cash App. Last week, GoDaddy bought Poynt, Fiserv signed an agreement to acquire Ondot Systems, and IBM bought Canadian fintech, Expertus Technologies. Across the industry, there’s speculation about whether or not acquisitions of this scale will continue across fintech next year (we think so).

One of the more exciting trends of the year has been the increasing collaboration between legacy financial institutions and newer fintechs. As technology evolves, partnerships are becoming more and more vital to unify our new financial system. Infrastructure providers will continue to expand their as-a-service offerings, and banks will continue to loan their charter. These partnerships bring together the best of both worlds and give consumers better services and more choices.

Let’s start with the more prominent players. Amazon introduced a new digital credit line for U.S.-based merchants with partner bank Goldman Sachs and then partnered with Citigroup to provide installment loans on big purchases over $100 on the e-commerce site. Chase bank partnered with Sensibill to offer digital receipt management via the Chase Mobile app. Lloyds Banking Group is running a six-month trial of an invoice financing platform from Satago Financial Solutions. This month, Stripe, Goldman Sachs, and Citigroup teamed up to offer checking accounts and other business-banking services to Stripe’s customers. Lastly, in an exciting move for open banking, Citibank and Deutsche Bank have open-sourced parts of their banking technology to the Fintech Open Source Foundation, which looks to make code open-source throughout the financial services industry. As the big banks sign very specific agreements, regional banks have been the most open to broad fintech relationships, especially related to “rent a charter” type deals. Banks like Cross River Bank, Celtic Bank, and WebBank, have all capitalized on the opportunity presented by fintech lending. And many community banks have embraced fintech partnerships through agreements with companies like Cambr because more deposits can allow them to grow and make more local loans. For as many players in the banking industry who see fintech as a threat, equal amounts are willing and ready to collaborate.

In proper 2020 form, the US government remains divided on its approach towards fintech (though not along partisan lines). Let’s start on the welcoming side. The government has relied on fintechs to distribute capital to businesses and individuals during the pandemic. Chime, PayPal, Square, and Intuit all helped Americans access stimulus checks, and regional banks and fintechs (like Cross River Bank and Kabbage) stepped up in a big way to facilitate PPP loans. Beyond pandemic relief, the Office of the Comptroller of the Currency (OCC) is making waves by granting national bank charters to fintechs. The Acting Comptroller, Brian Brooks, believes a national charter is beneficial because it allows fintechs to operate nationwide under a uniform regulatory framework subject to a single primary prudential supervisor and boosts consumers’ confidence. In July, Varo Bank became the first fintech to receive a full-service charter from the OCC, and in October, SoFi became the second (Square is also in the works). Brooks even went as far as to propose a new idea this week: a cryptocurrency token that governments could use to reward citizens for accomplishing educational milestones, to grow GDP, and eradicate inequality. The OCC isn’t the only department relaxing banking standards for fintechs: the FDIC approved a new rule that will ease capital and liquidity requirements on big tech companies like Amazon and Facebook that want to lend money and act more like banks.

On the other hand, the idea of private companies taking over more and more aspects of our financial lives is of concern to multiple governing bodies. Fintech-powered PPP loans and stimulus checks, along with all open banking services, require consumers to give third-party services access to their financial data. It’s a process governed by regulations in many countries, but not in the U.S. China, like the UK, is increasingly tough on its largest technology firms. Jack Ma’s Ant Group is feeling the heat as China’s government launched a coordinated regulatory crackdown and rolled out strict new antitrust rules. The U.S. is starting to apply the same scrutiny. The DOJ dug into the large-scale data-driven acquisitions of Mastercard and Visa to ensure neither wound up with a monopoly on consumer data. And the Consumer Financial Protection Bureau (CFPB) has issued an advanced notice of proposed rulemaking that seeks comments and information to assist the bureau in implementing section 1033 of the Dodd-Frank Act, which will determine how consumers' access to their financial information is regulated. A future decision by the CFPB could put the US on a path to a more standardized open banking system, similar to that of the UK. A more unified system would increase the competition for incumbent banks. Still, ultimately it could lead to a vast array of new services and a new level of convenience for consumers that can help them take better control of their financial lives.

The pandemic has catalyzed consumer adoption of digital payments and payments infrastructure, forced banks and traditional financial institutions to either partner with fintechs or develop their own digital strategies, and catalyzed the relationships between fintechs and regulators. For better or worse, 2020 has pushed payments technology into overdrive and will be remembered as an industrial inflection point where payments infrastructure became the backbone of our commercial world.

Our mission at Finix is to turn every software company into a payments company. We’ve expanded our product offering this year with lots more to come to make payments accessible, seamless, and simple. Learn more about how you can implement a better payments experience into your product with Finix.

Learn how you can implement a better payments experience with Finix.