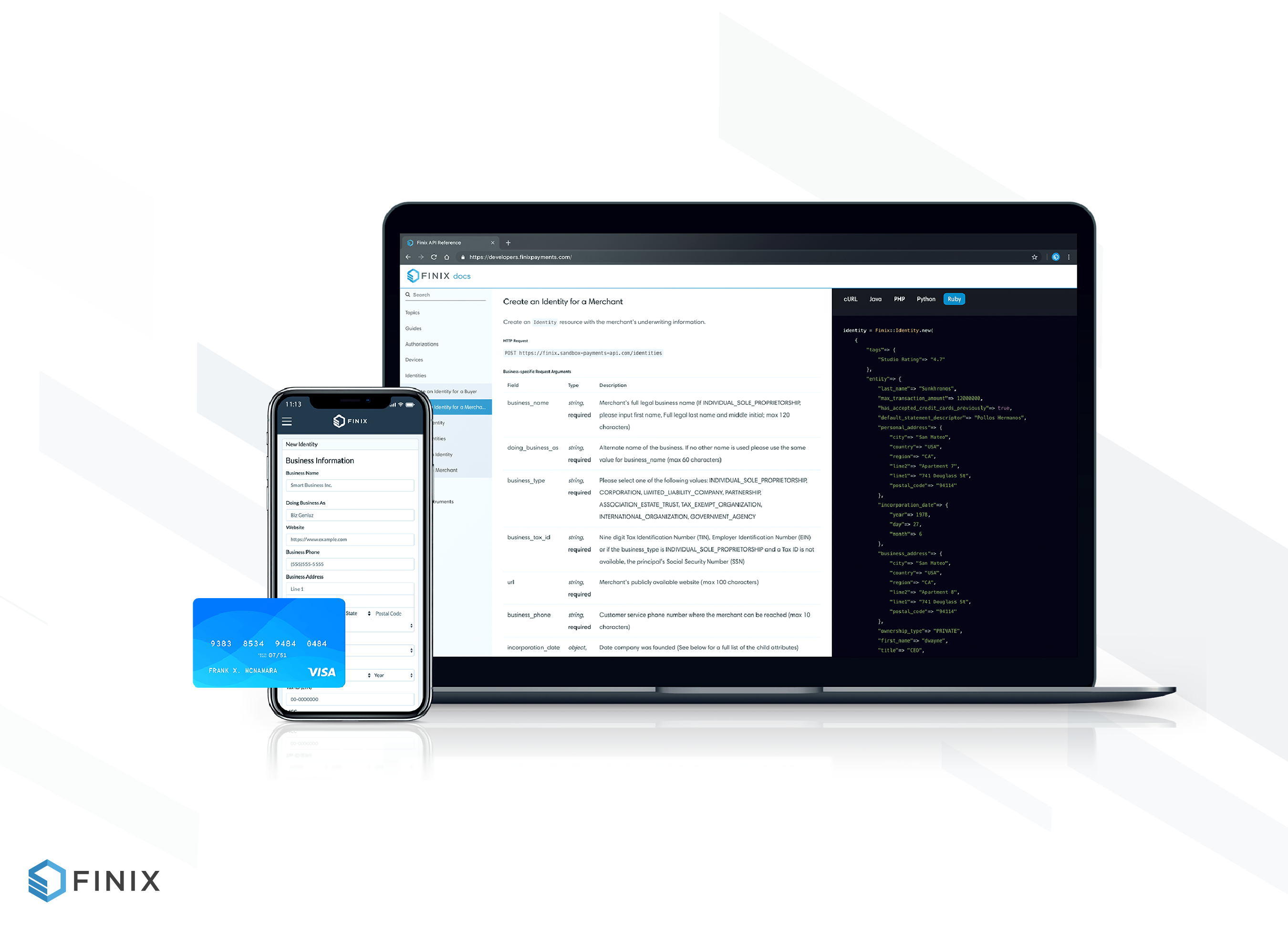 The Next Billion Dollar Payments Company Will Be Built on Finix

Traditionally, becoming a payment facilitator was a time-consuming, complicated and expensive proposition -- but Finix is changing the equation, and leveling the playing field for businesses that want to own, manage and monetize their payments in as little as 60 days.

The most popular payment facilitators of the previous generation – horizontal payments providers like Stripe and Square – have spent the past decade perfecting their clean interfaces, simple pricing, and instant merchant onboarding. They’ll share their infrastructure with you but only in exchange for a percentage of your processing volume. Simple enough, but expensive at scale. Alternatively, you can build your own stack on top of legacy payments processors like Worldpay and First Data; fantastic partners but integration is often a painful and time-consuming journey. Finix offers a third option by providing best-in-class payments infrastructure on which software companies can own, manage and monetize their own payments stack.

The billion-dollar payments companies of the future won’t look like Stripe or Square. They will be vertically-focused software companies with payments integrated deeply into their core. At Finix, our mission is to make that future a reality.

Today, we’re thrilled to announce that Finix has secured $17.5 million in Series A funding to help us continue to build the best payments infrastructure possible and expand our worldwide footprint. We’re payments nerds, which is why we’re thrilled to be partnering with some of the most experienced leaders and innovators in fintech as part of this announcement.

Matt Harris from Bain Capital Ventures, which led the round, will be joining our board of directors. We’re also profoundly grateful Visa, Insight Partners, and Aspect Ventures are joining the company as investors that share the vision and excitement for redefining the economics of payments by transforming it from a traditional cost center to a profit center. Finally, we’d like to thank our earlier investors, including Homebrew, Precursor Ventures, Act One Ventures, Class 5 Global, Village Capital, and Argo Ventures for their continued support. This is only the beginning and we can’t wait to work with this incredible group of investors to support the next generation of payments companies.

With Finix, companies can become their own payment facilitator without the pain and expense of building a proprietary payments system in-house. We give teams the flexibility to configure the perfect payments stack for their business and deliver a seamless payment experience, quickly and cost effectively -- and to run the entire experience through a single platform of record.

To make it all possible, we’ve brought together some of the best and brightest minds in payments and technology – from established payments companies like First Data, PayPal, and Worldpay and fintech startups like Klarna and Balanced – to build a novel solution for the rapidly-changing realities of modern payments. Here’s a look at the backgrounds and experiences that led us to create Finix:

Richie is the CEO of Finix, which he co-founded with Sean Donovan in 2015 to redefine the economics of payments. Previously, he was a software engineer at Balanced, the first payments API for marketplaces. During his tenure there, he recognized the major gap that existed for companies that wanted to monetize their payments, but that lacked the considerable time and resources to do so. Richie began his career in management consulting for Booz & Company's Financial Services group in New York. He graduated with honors from Harvard University.

With nearly two decades of payments experience, Sean is a co-founder at Finix and leads the company’s sales efforts. He has deep knowledge of the payments industry and a unique understanding of how to help businesses navigate the complexities of an ever-evolving payments facilitation landscape. Previously, Sean served as vice president of payment facilitators and integrated partners at Vantiv (now Worldpay, Inc.), one of the world’s largest payments processing companies in the world. He holds a BS in finance from Northern Kentucky University.

Hank leads Finix’s engineering efforts, where he ensures that customers are able to seamlessly build and scale their own payments stack. He has previously led engineering efforts at some of the world’s largest payments companies and holds a patent for authentication data-enabled transfers. He spent more than 12 years at PayPal, where he ultimately rose to senior director of data management and engineering operations. Prior to Finix, Hank was VP of engineering at Veem. He has also held engineering roles at Credit Suisse and D.E. Shaw & Co. Hank has a BS in electrical engineering and computer science from the University of Michigan.

Connect with Hank on LinkedIn.

Jareau brings more than a decade of high-growth startup experience to Finix, where his responsibilities include overseeing marketing and demand generation. Prior to Finix, Jareau led ecommerce product partnerships at Pinterest and was a co-founder of Balanced, the first payments API for marketplaces. Jareau was also employee number one and head of data acquisition at Milo.com, which is now part of eBay. Jareau started his career as a teaching fellow at the Meltwater Entrepreneurial School of Technology (MEST) in Accra, Ghana. He holds a BSE in electrical engineering from the University of Pennsylvania.

An industry veteran who has worked in the payments field for more than 20 years, Dan oversees disbursements and channel partnerships at Finix. He has extensive experience overseeing payments-related product lines, including leading solutions strategies for First Data. Most recently, he was head of product development for the payments and commerce division at Fifth Third Bank. Dan has an MBA from Xavier University and a BA from the University of Dayton.

Connect with Dan on LinkedIn.

If you’d like to join this crew of payments enthusiasts, check out our jobs page.

Finix is the smartest way for businesses to own, manage and monetize payments. Created by payments experts from First Data, PayPal, and Worldpay, Finix is trusted by companies like Lightspeed POS Inc. and Clubessential. to build and scale their payments infrastructure. Headquartered in San Francisco, with an additional office in Cincinnati, Ohio, Finix is a privately held company funded by Bain Capital Ventures, Homebrew, Insight Partners, Aspect Ventures, Visa, Precursor Ventures, Class 5 Global, and Village Capital. To learn more, get in touch.